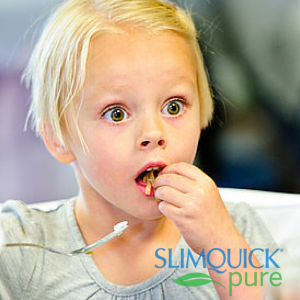 The psychology of snacking is a complicated one. While there could be several reasons behind why you just can’t resist that bag of Pringles before bed every night, the one reason for bad eating that a recent study ruled out is actually wanting to eat in the first place.

Researchers at the University of Southern California observed that bad eating habits won people over even when the food didn’t taste good. Movie goers were randomly given either freshly popped popcorn or week-old, cold and stale popcorn. The audience members who didn’t normally buy popcorn at the movies ate much less of the stale popcorn, while audience members who regularly ate popcorn at the movies ate all of the popcorn they were given, whether it was fresh or stale. The taste or desire for the actual food didn’t seem to make a difference – these moviegoers ate the distasteful popcorn simply because that’s what they always do.

“When we’ve repeatedly eaten a particular food in a particular environment, our brain comes to associate the food with that environment and makes us keep eating as long as those environmental cues are present,” said lead study author David Neal, psychology professor at USC and director of a social and consumer research firm.

In other words, no matter how fattening or unhealthy you know a snack food to be, no matter how much you stuffed yourself at dinner to make sure you wouldn’t get hungry later, no matter how gross the food or the regret you know you’ll feel after eating it – once you’ve started a bad eating habit, you’ve programmed your mind to keep repeating it.

That is, unless you change your mind.

These 3 techniques have been scientifically shown to help you stop overeating, kick bad eating habits and reboot your brain to start developing better eating patterns that aide with good health and women’s weight loss. 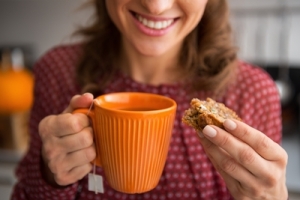 1.) Change it up. “Sometimes willpower and good intentions are not enough,” explains Neal. “We need to trick our brains by controlling the environment instead.” The USC research group followed up their study with other snacking experiments, and they came to see that even the slightest change to bad eating routines help snackers become more mindful of their eating and to eat less. When the study participants were shown a movie in a conference room instead of a regular movie theater, they ate much less stale popcorn. Even just asking the noshers to eat the popcorn with their non-dominant hand helped them portion control their snacking and not overeat, as they usually did. This has powerful implications for hard core snack addicts. While it’s not always possible or easy for dieters to completely avoid or change where they snack and typically overeat, it is possible to start regaining control over eating by making simple changes to how they snack. Next time you snack, trying using your non-dominant hand to eat, or try sitting up in a chair (or even standing up) during eating rather than lying down on the couch. Better yet, try to make snacking a dedicated activity performed at the table, and try to avoid doing it at the same time as another activity, like watching television, a movie, in front of the computer or while on the phone. This will help your brain to no longer view these other activities or environments as triggers for (false) hunger, tuning you back into eating when your body tells you to rather than when your mind does. 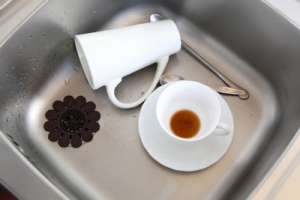 2.) Clean it up. Researchers at the University of Minnesota found that putting people in a clean and tidy setting, versus a messy and disorderly one, led to better behaviors, like not engaging in crime, not littering, giving more money to charity, and making healthier eating choices. In several experiments, people were asked to fill out some questionnaires in either a tidy, neat and orderly office, or a messy, dirty and cluttered one. After the participants completed their questionnaires, they were given an opportunity to donate to a charity, and then they were presented with two snacks to choose from on their way out – either an apple or a candy bar. Compared to the participants who worked in the messy room, the researchers found that the people who emerged from the tidy office donated more money to charity and were more likely to select an apple for a snack instead of the chocolate bar. Psychological scientist Kathleen Vohls believes that being in a clean, organized environment encourages people to conform and do what’s expected. For women looking to lose weight, this can be used as a powerful mental tool to help you conform to your own weight loss goals. Before sitting down to your next snack, take a few moments to clean up your immediate surroundings first, which could help you make cleaner, healthier food choices that stay true to your self-expectations and weight loss efforts. 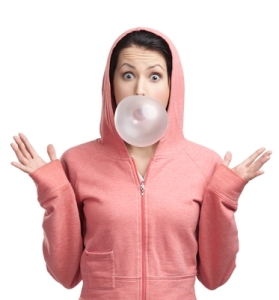 3.) Chew it up. Years of bad snacking habits ingrain themselves in to the deepest and oldest parts of your brain. These parts of the brain are wired to make you repeat habitual movements that don’t require thinking, like handling something in your hands, putting it into your mouth, and chewing it. The bright side is that your ancient brain isn’t overly concerned about what that thing actually is. Whatever is closest, easiest and requires the least thought often does the trick. For dieters, the key is recognizing that there is a difference between your brain’s need for an oral occupation and actual hunger. This means that you can often satisfy your habitual “snacking” urges with activities other than snacking. Chewing gum, nibbling on a celery stick, or continually sipping a warm beverage can often calm down your brain’s need for an oral occupation just as well as a bag of Pringles. Or sometimes, simply occupying your hands is enough to satisfy a snacking urge (which is often triggered by boredom in the first place), like twiddling with a pencil, twisting a rubber band, or giving yourself a hand massage.