While most of us feel completely lost when it comes to our own personal weight loss, there’s a certain weight loss “common sense” that we all seem to automatically know and attempt to follow without question. ‘Cut out all fat!’ ‘Eat more celery!’ “Have grapefruit for breakfast!’ ‘Lower your salt intake!’ Sound familiar?

But have you ever stopped to wonder what’s behind some of these assumptions, and whether they actually have anything to do with weight loss in the first place? Which of these oft-repeated weight loss slogans hold any truth to them, and which can be dumped into the outdated weight loss bag o’ myths (behind the spam, leg warmers and sauna suits)?

For example, how does salt – which contains practically no calories at all – contribute to weight gain? And how could cutting back on it actually help you lose weight?

Shaking Up Your Sense of Salt 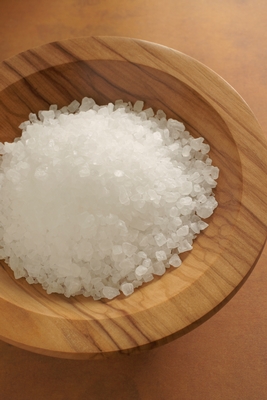 Sodium, a component of table salt (which is sodium chloride), is a mineral found naturally in most foods. Everyone needs some sodium in their diet; in fact, salt could do every one a bit of good, as your body requires both sodium and chloride and cannot manufacture either of these elements on its own.

Sodium is an element that is crucial to your very survival. It’s a critical electrolyte that carries electrical messages throughout the body. It also helps to regulate blood volume and blood pressure by maintaining a good water balance between the inside and outside of your cells. The important role that sodium plays in your health is why humans are instinctually attracted to salty foods, and why you have a taste bud specifically wired for it, forming one of the basic components of taste.

But these healthy functions all hinge upon your body’s ability to maintain a proper balance between sodium, potassium and other essential elements in your body. The “sodium” problem arises because most people wind up consuming much more than the body actually need, which can result in pressure and flow changes that are harmful to your health.

Just think of a tantalizingly chewy strip of beef jerky or salty bacon. Salt is used to cure and dry out these foods, and it has the very same effect on the cells in your body. When you eat too much sodium, water gets drawn out of your cells and leaves them dehydrated inside. This causes your body to hold on to the water outside of the cells instead, retaining it in your bloodstream, your skin, etc. The result? That dreaded puffy look in your face, swollen hands, a bloated belly, that uncomfortable feeling of tightness in your clothes — in short, a good ol’ fashioned “fat day”.

But is this post-salt binging fat fest actually a result of fat gain? The answer is no. It’s just temporary water weight brought on by electrolyte imbalance. Drinking more water and eating potassium-rich foods help to counteract these salty effects, bringing your electrolyte balance (and your pudgy pants) back to normal.

Does this mean we should bow our heads in shame for smearing (or not smearing enough) salt when it comes to weight loss? Not quite. For, while eating salt may not directly pack on the shmultz, it could indirectly lead to weight gain in the long run.

This is because the worst culprit of sodium in our diets isn’t from the salt shaker on the dinner table. It actually comes from all the many hidden doses contained in processed foods, packaged foods, canned foods, snack foods, pre-prepared foods and restaurant foods, that sadly make up the vast majority of the American weekly diet. And it’s all of these sodium-rich foods that also tend to be the bearers of unhealthy amounts of fat, calories, sugar, preservatives, chemicals, and other such causes of real weight gain, with little-to-no nutritional value to boast of.

Also, consuming too much sodium with insufficient water (which, according to Tufts University, most Americans are guilty of doing) leads to chronic dehydration, which is a common cause of overeating, weight gain, and a number of other serious health problems. Overdoing sodium in your diet can lead to medical issues such as high blood pressure, heart disease, hypertension, kidney disease, osteopenia and osteoporosis.

The U.S. Institute of Medicine recommends that healthy adults consume about 1,200 to 1,500 mg of sodium a day. But most of us probably aren’t going to keep a running sodium tab of all the foods we eat in our heads.

Instead, try an easier strategy that will yield a much wider array of health benefits, including weight loss: simply eat more fresh foods every day. Eat fresh vegetables, fruits, legumes, grains, fresh seafood, and lean and unprocessed poultry and chicken, all of which naturally contain low amounts of sodium.

The biggest favor you can do yourself is to collect some quick and simple recipes that involve raw and natural foods, and to cook them from scratch whenever you can (or cook in bulk for the week, if you’re short on time). Even if this involves adding your own dashes of salt to the menu, you can do so with less guilt involved, as it will likely be far less than what you were consuming from all of the processed foods you are now actively cutting out from your life.

What’s important to keep in mind is that almost every food that’s been modified, processed, packaged, or pre-cooked in any way will almost always have had extra sodium added to it. This is done to mask the lost natural flavors that were stripped from the food when it was processed, and is also done to help preserve the food and keep it on the shelves longer. However, while adding extra sodium to everything is the convenient solution for food manufacturers, it almost always spells disaster for you, your health and your weight loss goals in the long run.

Cooking from scratch and avoiding canned and packaged foods allows you to take control of how much salt you are eating, while also helping you avoid other harmful preservatives and additives that lead to weight gain. It can also open your eyes to all of the other fantastic herbs and seasonings available out there to flavor your food, encouraging you to become less reliant on salt and more accustomed to tasty, fresh and healthy foods that optimize your health while naturally controlling your weight.